Today was a doozy. I started out with waking up late and rushing to work due to a rough night’s sleep again. Coffee save me!

I started out the morning attending the Creative Couch session at work.  This is an overview of marketing and sales activity within the company and market. Pretty good information until it got to a particular campaign at Shanghai Disneyland which is now celebrating it’s one year anniversary.

I’ve scoured the internet looking for it but unable to find the exact commercial that was shown.  The video clip showed a Dad that was a taxi driver in Shanghai ferrying families to and from Disneyland.  You see him working hard, eating lunch in his car, and missing time with his children. After losing my dad just 19 months ago, it left me as a puddle on the floor.

You see, my dad was that hard worker that took us to Disneyland in Anaheim.

Coming to grips with my dad’s death is something I still struggle with. Part of this is due to the fact that I lacked remorse when it happened.  I actually felt a sense of relief.  And I’ve pretty much punished myself everyday for it since. My dad was a big pain in the ass and there are many people reading this near and far who will whole-heartedly agree with me. He took it as a personal mission to inflict malcontent on almost every situation he came across.  He would switch sides to argue the opposite and be a constant negative force. I never really forgave myself for the relief I felt and it’s been this constant anvil I’ve carried around since. While my dad was an SOB, I loved him. We fought, argued, laughed and spent countless fun times together. I still can’t stop myself from the instant tears that form when I think about how I should feel now that he’s gone.

I do miss him. I do feel awful that I ignored his final call to me the day he passed.  But when I see those family heartfelt moments portrayed in movies or commercials, I can’t stop the lump that forms in my throat or the tears that follow. My dad was a P.I.A. S.O.B. and I have to be O.K. with feeling that way.  He was also a great dad that worked hard, taught me how to hammer a nail, change oil on a car, ride a motorcycle and hike a mountain. Oh and he took us to Disneyland too. 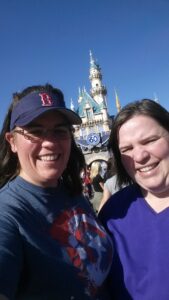